PALERMO - Palace located in the heart of the historic center in one of the iconic squares of the city. That area is the city epicenter, a short distance away there are located the main landmarks such as Palazzo dei Normanni, the Cathedral, the Railway Station and the Teatro Massimo. The Palace consists of six floors
above ground, whose elevations overlook Via Maqueda, Via Vittorio Emanuele, Salita Castellana and Vicolo Mori. The palace was built in the second half of the eighteenth century; its current configuration dates back to the second half of the eighteenth century, designed by two important architects from Palermo. The structure is characterized as a noble palace of the Baroque period with a central court, a mezzanine floor above the ground floor, intended for the administration of the house and the accommodation of the servants, and the noble floor. At the roof level there are several terraces and various skylights that illuminate the lower levels. On the noble level (1st floor) the vaults of the rooms are decorated with frames, stucco and paintings that are work of two of the greatest artists of the time: Gioacchino Martorana and Giuseppe Velasco. The best example is the “Magnificent Gallery”, in whose vault is represented the “Triumph of Constantine Emperor”. It is a noble palace with main entrance submitted by the Superintendence to BB.CC.AA. of Palermo with monumental constraint pursuant to law 364/1909, reconfirmed pursuant to art. 71 of the law 1089/1939 with notification to the owners of 06.08.1949. The total area of the building is 8.000 sqm. In the past, building permits have been received for the necessary restoration work for the hotel. Ref 5957 DiLeoImmobiliare 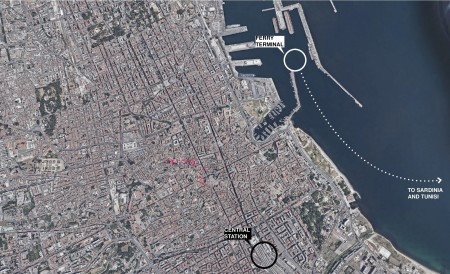